Your donations make it possible

for us to develop new partnerships and programs in your community.

Marystown Women’s Shelter Gets A Gift From AVON
Posted Sep. 06, 2018
None 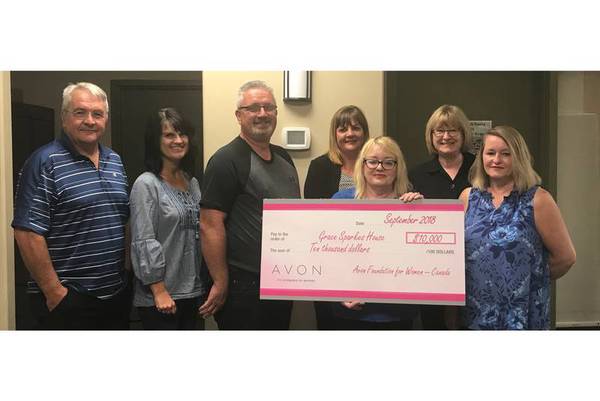 The cheque was presented to the Grace Sparkes House Board of Directors on Aug. 30. Left to right are: Grace Sparkes House board members Clyde Jackman, Ruby Hoskins and Mike Walsh; Lynn Skeans, AVON Business Development Manager for NL; and AVON leaders Bernadette Snow, Yvonne Crewe, and Elaine Tarrant (who is also a GSH board member). - Contributed

The donation is in recognition of local sales leader Elaine Tarrant and her team’s fundraising efforts, which have raised nearly $14,000 for GSH since 2012.

Tarrant says she is “grateful and thankful” for the donation.

“It’s hard to believe that a little walk that we started in 2012 which raised a few hundred dollars could come to this. It just shows that everybody can make a difference.”

“Avon is all about the empowerment of women.”

The giant cheque was presented to the charity’s board of directors on Aug. 30 at Grace Sparkes House. How it will be spent is a decision the board has yet to figure out but, according to Tarrant, that shouldn’t be too hard.

“There is always a need,” she says.